Out of the Closet

Kitten heels, wedges, stilettos, I have a weakness for shoes with some height.  I'm also obsessed with exercise but it seems there's never enough time to get to the gym.

That's why I'm crazy for MBTs.  The one and one-half inch, wedge-like heel on the Sport helps you multi-task working out with cleaning house, getting mail or going to Target. 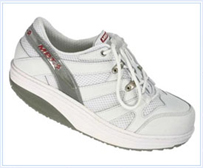 invented for women and men by Swiss engineer Karl Muller helps tone your lower half.  The curved sole will have you walking with a rock-and-rock motion that enhances muscle activity in the buns, rear thigh and calves up to 19 percent.  In addition, this physiological footwear improves posture and reduces stress on knee and hip joints.

With routine wear, you'll notice a difference in a few months.  And you won't be alone. When others begin asking for your firming secret, you'll know these shoes are well worth the investment.

Positive reinforcement from family and friends (not to mention coming to terms with the mirror) had me living in my pair in the beginning.  However, you can get too much of a good thing.  Overdoing it can make other shoes less comfortable.  And since you sacrifice some style in these workout wonders (I'm sorry but it's tough to make athletic gear attractive), MBTs are best worn casually within limits.

Today, MBTs are my shoes of choice for errands and around the house but I leave them at home when I go to the office.  To find out more about their benefits, go to www.swissmasaius.com.  You can purchase MBTs in a variety of looks from www.Amazon.com. 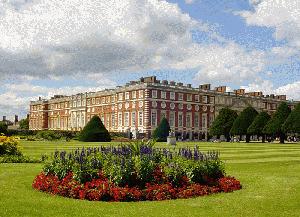 I took this photo at just outside of .  It's the former home of King Henry VIII and the grounds are amazing (but then, if you had the Queen's money your backyard could be amazing, too).  If your budget doesn't allow transatlantic travel this summer, you can still take a look: http://www.hrp.org.uk/hamptoncourtpalace/

The Very Best of Dwight Yoakum

I've been a fan of the evil incarnation of Buck Owens for quite some time.  Why? 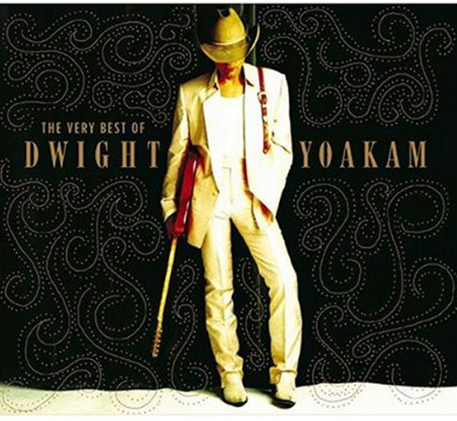 Yoakum channels Buck better than Buck ever channeled Buck.  He gets the twang just right and his crossover country licks never sounded better.  That's why, "The Very Best of Dwight Yoakum," is as the title promises, the very BEST.

Originally released in '04, this gem contains 20 tracks that cover everything from his breakout hit "Guitars, Cadillacs," to "Things Change" and the "".  Each one's an audio delight that should be required listening for any road trip of 100 miles or more.

Buck invented the sound, "I've got a tiiiiiiiiiiiiiiiiiiiiiiiiiiiiiiiiger by the tail," but Dwight's been polishing that diamond to a sparkling brilliance for the past 25 years.  This isn't music you'll have to apologize for if you loan the Escalade to your kids and it comes BLASTING out of the speakers.  Dwight's all right and his Very Best is all good.

A must have for any road trip

No way.   If they balk, tell 'em Dwight was the "mean guy" in Sling Blade and then watch that movie with them.  If that doesn't convince them Dwight's a genuine badass, nothing will.

If it's not on your Amazon.com Wish List it should only be because you already have it in your collection.

Where Can I Get This Gem? 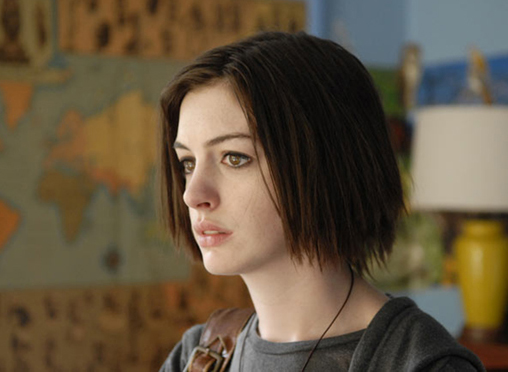 You know the difference between a severe concussion and a mild concussion?  A SEVERE concussion is one that happens to you.

It's the same way with black sheep.  Every family has one (or an entire flock).  The only time they're mild is when they belong to someone else.  When the black sheep are your problem it's a bitch.  "Rachel Getting Married" let's you enjoy the mild concussion of watching another family's black sheep in action.  It's film voyeurism at its very best.

Written by Jenny Lumet (yep, she's legendary director Sidney's daughter,)  directed by Jonathan Demme and starring Anne Hathaway in her Academy Award nominated role, "Rachel Getting Married" literally makes you part of the wedding party.  The film begins with black sheep Anne Hathaway being released from rehab and rushed home in time for the rehearsal dinner.  She's the chain-smoking been-in-and-out-of-rehab sibling of Rachel who's getting ready for her big day.

It's clear from the beginning that Kym (Anne Hathaway's black sheep character) is a train wreck in progress.

While any sane family would assume the crash position in anticipation of the 12-step impact of a returning drug addict, these folks don't even buckle their seat belts.

Guess what happens.   Everybody gets some bumps and bruises.  A few fare even worse.

Along the way we're treated to all the (ab)normal trappings of today's weddings - from uncomfortable speeches at the rehearsal dinner to lame music at the reception.  It's all here as we watch Kym connect dependent to co-dependent as only a narcissistic narco-addict can.

If you're a Boomer dad shelling out the long green on your baby's summer wedding, you might want to send your regrets to this one.  It'll give you nightmares.  If, however, you want to see how another family handles their trip to dysfunction junction, send in your RSVP.  Rachel Getting Married is one wedding worth attending, even if you need a couple of aspirin.

The Boomer Brief recommends NetFlix (www.netflix.com) for your movie rentals.  The monthly rental packages start at only $4.99 - and you can cancel at any time.

Read it? Watched it? Heard it? Ate it? Bought it? Share your faves with the Boomer Universe right here.