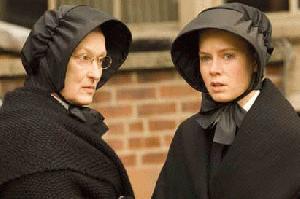 I wasn't raised Catholic, but there's a part of me that identifies with the structure and solemnity of the religion.  To us outsiders, it's one part theology, one part theater with a lot of repressed feelings and guilt sandwiched in between.  It's fertile ground for filmmakers whether you like period pieces such as "Becket," or Monty Python's irreverent "Life of Brian".

The only similarity between "Doubt" and other religious films is that it makes you think.  The minute you believe you have the plot figured out, your own doubt surfaces and you change direction.

"Doubt" isn't a "whodunit."  It's a "did-he-do-it".  As in did the young, hip (at least for the early 1960s) priest have his way with the African American altar boy.  That's what Sister Aloysius Beauvier (Meryl Streep) wants to know.

She's aided in her quest for the truth by the kind-of-hip but very unsteady Sister James (Amy Adams).  Of course the only thing standing in their way is the irrepressible Father Flynn (Phillip Seymour Hoffman) and the altar boy's mother Mrs. Miller (Viola Davis who goes womano-a-womano with Streep in an Oscar-nominated performance).

This is an adaptation of the brilliant Broadway play by John Patrick Shanley, so be prepared for some great dialog.  Cars don't crash and tanker trucks don't explode, but Streep and Hoffman clash in a Catholic battle of the titans that will have you hanging on every syllable.

Streep uses her words like a prize fighter and lands every punch with Ali-like precision. Hoffman's Father Flynn is a worthy adversary in the squared circle.  He may be bloodied, but always unbowed.

I'm no theologian, but I believe the biblical message of "doubting Thomas" is that it's OK question.  In "Doubt," questioning isn't just OK, it makes for some terrific entertainment.

The Boomer Brief recommends NetFlix (www.netflix.com) for your movie rentals.  The monthly rental packages start at only $4.99 - and you can cancel at any time.

Boomer buddy Jay Elder gave us this list of the Top 10 Country songs.  In addition to being a lover of fine country music, Jay's an insurance expert with a knack for helping Boomers with their insurance needs.

And the Number One Country Song....

1.   It's Hard To Kiss The Lips At Night That Chewed My Ass All Day Long 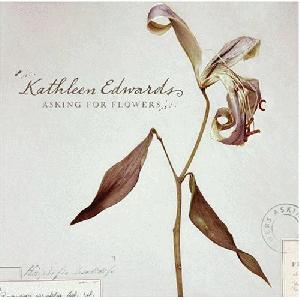 If you haven't discovered Kathleen Edwards by now, you're in for a treat.  This Canadian songstress is possibly the best singer-songwriter to come out of since Leonard Cohen walked out of .

An IPod Fit for a Queen 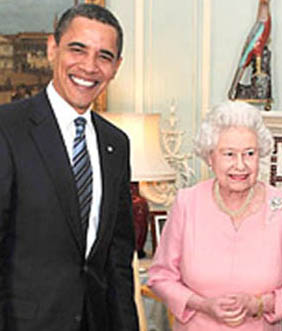 By now, you've probably heard that President Obama gave the Queen of England a sterling silver IPod while attending the recent G20 Summit in
London. Music taste aside, why on earth would anyone think an IPod is the perfect gift for an octogenarian?

Would you give one of your parents a complicated electronic device as a present?

That's what happened to the Queen. Here's a taste of what she got on her pre-loaded IPod:

Bored with your leftover Easter ham? Give it new life in these easy, sure-to-please subs.

As Boomers, we've seen the hip fade to hilarious so many times we've lost count.  We were the first to use the hula-hoop for God's sake.  Now it's back in our living rooms thanks to Wii Fit.  Everything old is new again, which means there's hope for me yet.  There's also hope for Larry the Cable Guy and quite possibly the world as we know it.

Larry's shtick is that he's a redneck who ends just about every sentence with "Git-R-Done!"  DELIVERANCE stereotype aside, Larry penetrates (sorry, Ned Beatty) much deeper.  By holding up a mirror so we can see ourselves and the world around us.