Here's the deal.  Four and a half years after I put Charlotte and myself on the waiting list for this prestiguous lecture series I get the call.

"Congratulations," they tell me, "you've made it to the top of the list."

Which had me thinking all LIST?  WHAT LIST?  Then I remembered something about enrolling Cole in this oh-so-private university and signing some form at orientation about tickets for this lecture series they've been having since, I dunno, ABE LINCOLN was president.

OH, that list.  At least that's what I told the sophisticated woman on the other end of the line.  A mere 60 seconds later my MasterCard was back in my wallet 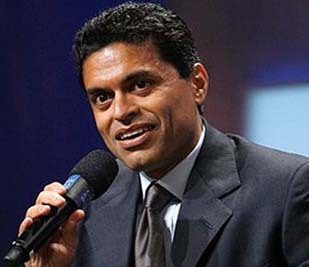 and I was the proud owner of two season tickets to the most exclusive lecture series this side of I-35W.  I know what you're thinking.  No, my butt doesn't look big in these pants and yes, I rock.

So I went.  Errr, make that we went.  Charlotte couldn't make it, so Cole and I had a guys night out.  That's right, two adult males on the loose in the fifth largest city in the country.  We did what any self-respecting Texas males would do when faced with all that opportunity.  We saw Fareed Zakaria, Thomas L. Friedman and David Gergen debate healthcare and the world situation for 90 minutes.

"Hurry up," I said, "or all the really good Fareed Zakaria
T-Shirts will be gone."

Since we're more likely to attend rock concerts than lectures, it took a few adjustments.  As we were leaving one of our favorite campus sandwich places and heading to the lecture I urged Cole on.  "Hurry up," I said, "or all the really good Fareed Zakaria T-shirts will be gone."

Boy was I wrong.  No Zakaria T's or even any CNN merch in sight.

I figured we'd settle for a New York Times T-shirt instead.  No luck here, either.  This was no Armadillo World Headquarters kind of deal.  This was more like Night at the Museum without the in-your-face freaky monsters and Robin Williams dressed up like Teddy Roosevelt.  It was much better than that.

Messrs Zakaria, Friedman and Gergen know their world affairs and they kept the sell-out crowd on the edge of their seats for the entire lecture.  I don't know what I was expecting, but I got more.  Much more.  The collective insight was powerful.  It was - what I imagine to be - like being a fly on the wall in the CNN greenroom.

For a pseudo-intellectual like me it was pretty cool to hear these guys work without a net.  There was no need to break for commercials or find out who Larry King had coming up later.  No, this was pure opinion from three of the best minds in the country.

"Don't tell Mom we were here," I continued.  "She thinks we're at a strip club."

They even had time for the obligatory Q&A session where the winner of the "WHO CAN ASK THE MOST INANE QUESTION" lottery steps up to the open mike.  Dude, if you don't have anything to say, then save us all the awkward silence that will surely follow your rambling, run-on sentences.

All I could think, was it took me 54 months to get here and listen to this jerk ask a non-question?  He's lucky I left my Batman costume at home, or I would have swooped down from the second balcony and sucker punched the sucka.  KAPOW!

The houselights came up and Cole and I made our way through the crowd who were replaying the evening's greatest lines to each other.  Even the wittiest wonk is no good at imitating the real thing - especially when you have their words ringing in your ears.

I asked Cole how he resisted the urge to hold up his lighter in the darkened auditorium, in a plaintive plea for an intellectual oncore.  He grinned at me as if to say "Yeah, that's stupid, but there were plenty of lines worth repeating."

There were.  So I couldn't resist adding my own.

"You know this was kind of geeky, but a whole lot of fun," I said, stating the obvious.  "Don't tell Mom we were here," I continued.  "She thinks we're at a strip club."