Heart of a Patriot

Max Cleland's memoir, Heart of a Patriot How I found the Courage to Survive , Walter Reed and Karl Rove, is an emotional and insightful journey that probably took as much courage to write as it did to live. 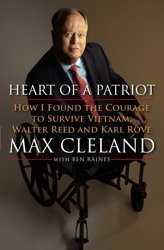 Cleland is a warrior in the truest definition of the term, but he's best known for the battles he's waged on floor of the U.S. Senate and in the power parlors of

His is an unlikely journey that begins in the small town of , Georgia and travels through , the White House and ultimately back home.  Cleland doesn't shy away from the mistakes he's made or offer up excuses for past behavior or poor choices.  This isn't a book about regret.  It's about hope, warts and all.

For any Baby Boomer familiar with Cleland's story, the turning point in his life came in the crucible of .  Cleland volunteered for a rescue mission just weeks before completing his tour of duty.  Here at Khe Sanh, the young officer jumps out of a helicopter and reaches to pick up a grenade that he believes has fallen out of his gear.  It explodes instantly, savagely ripping off both legs and his right arm.  Now, a triple amputee, the young officer has to find a way to (literally) piece his life back together.

The image of Cleland chasing a Secret Service agent in his wheelchair to deliver a letter protesting the Kerry attack ads is straight out of Monty Python's Flying Circus.

Cleland recounts the horrors of the months he spent at Walter Reed and the respect he has for the physical therapists that helped him regain mobility.  Physical therapy isn't easy and Cleland's words make you feel the pain right along with him.  And when he describes the nights spent in the amputee ward you can almost hear the moans of the wounded and taste the stench of disinfectant on your tongue.  It's powerful prose that helps you understand his absolute desperation to get back his life.

When he is finally discharged he's still a young man with nowhere to go.  He returns home to his high school bedroom and the life he left behind.  It's here that he encounters an even larger foe than the Viet Cong.  Depression takes over and he self-medicates with alcohol and everything that comes with it.  Rehab follows.  What comes with it is the revelation that since no one in tiny will hire a triple amputee he enters the political arena.

He runs and - and wins - a seat in the Georgia Senate and begins a 40-year career in politics.  Stops along the way take him through several successful and unsuccessful political campaigns on the state and national level.  We're also treated to behind-the-scenes anecdotes about political figures ranging from Presidents Carter, Clinton and Bush, to Senators Kerry, Byrd and Kennedy.

You'll wonder why no major news outlet has picked up on his Bill Clinton/Monica Lewinsky story.  It's the type of tabloid tale that usually sends everyone from The Huffington Post to Matt Drudge into overdrive.  I won't spoil it for you here, but it does shed some light on the scandal that led to 's impeachment 10 years ago.

Cleland is a life-long Democrat and this donkey brays when given the opportunity.  He so deeply regrets his vote to enter the war that it haunts him to this day.  There's also no love lost on President George W. Bush.  Cleland makes it clear that he despises the 43rd president, Karl Rove and others in his administration.

"I have dreamed many dreams that have never come true,

I've watched them vanish at dawn.

But I've realized enough of my dreams, thank God,

To make me want to dream on."

Max Cleland with Ben Raines, from Heart of a Patriot

His story of campaigning for Senator John Kerry and the Swift Boat attacks that ultimately sank his run for the presidency is political drama at its best (or worst).  The image of Cleland chasing a Secret Service agent in his wheelchair to deliver a letter protesting the Kerry attack ads is straight out of Monty Python's Flying Circus.

Cleland speaks often of trying to be "strong at the broken places".  It's more than metaphor.  It's a mantra and call to action for himself and a generation.  Max Cleland's memoir shows the full measure of a patriot, but most of all it tells the story of someone who gets up when he is knocked down by using whatever means he can.

Time Out:  At 259 pages, it's a quick read with an uplifting message.

Beach Worthy:  It's a little chilly at the beach right now.  I'd advise cracking this one open with a nice glass of port while sitting beside a roaring fire.