We Came in Pieces for All Mankind 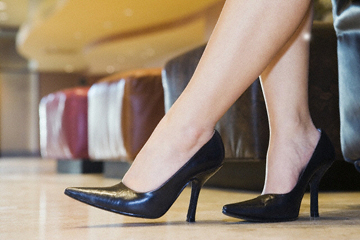 So Charlotte decided to accompany me to this hoity-toity lecture series Cole and I have been attending this fall.  Buzz Aldrin, the second man to walk on the moon (not this guy) was giving a talk on space tourism and the 40th anniversary of the moon landing.

Well, Charlotte didn't have anything better to do, so she decided to check out the spaceman and have dinner on another planet.  By "another planet," I mean somewhere other than our kitchen.

This was her first time attending the series so she didn't know what to expect.  Sure, Cole and I tried to brief her, but there was obviously something lost in the male/female translation.  How was I supposed to know she needed to know what SHOES to wear?

You avoid hitting any college student bigger than you, or one that says DUDE a lot. 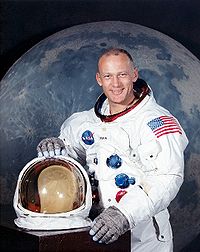 It's not something guys ask, or in my case, even THINK ABOUT.  Shoes?  Are you kidding me?  As long as you have something on your feet isn't that all you need?  Turns out I was wrong.  As in, HOUSTON WE'VE GOT A PROBLEM, wrong.

Since we were only on the waiting list for four years, our seats are in what an uncharitable person might call the "nosebleed" section.   Second balcony.  Sit anywhere you like, because it's first-come, first-served.  Just so long as you can drag yourself up to the ceiling.

I knew we might have a problem when we got out of the car.  The event is on a college campus so you can only park as close as the campus rentacops will let you park.  Which, in our case, is usually about two blocks from the auditorium.  Not bad if you're a guy.  Not great if you're a woman in 3" heels and IT'S RAINING.

See, I told you there was a lot missing in the translation.  To a woman this is a big deal.  To a man, it just means you'll either have a bad-hair day or you don't.  Doesn't really matter.  You just get to the auditorium as fast as you can and avoid hitting any college student bigger than you, or one that says DUDE a lot.

At 79 it looked as if he arrived in better shape than we did.

After a fast but wobbly start to our lecture adventure we made it to the auditorium.  This isn't just any auditorium.  It was either built in the '30's or by the Egyptians during the reign of Ramses II.  I dunno which, but it's really, really old and that means there are a hell of a lot of STAIRS.

Boomers you see where I'm going with this, don't you?

Tile stairs.  A woman in wet 3" stilettos.  Seating in the top of the second balcony.  It almost sounds TOO EASY.  We made out like Sir Edmund Hillary and Tenzing Norgay.  After a few minutes we summited the peak and made our way to our seats, where with just a little squinting, we could make out the stage below.

Astronaut Buzz Aldrin made it to the stage and the house lights dimmed.  At 79 it looked as if he arrived in better shape than we did.

He trotted out a slightly shopworn slide show recounting his lunar achievement and stellar (no pun intended) aviation career.  The guy is crazy smart (PhD from MIT) and recipient of the Presidential Medal of Freedom.  He's an undisputed legend.

Unfortunately, this rainy night in Big D he decided to phone it in.  He circled our planet for about 45 minutes and was done.  With Charlotte's feet still aching from our ascent into the heavens of the auditorium, we began our exit.

"Going down is a lot easier than going up," I reassured her.

"At least, that's what Buzz Aldrin tells me."