Netflix' new original series, Orange is the New Black, is more than just another edgy drama. It's a shot across the bow of traditional network and cable TV, because it's only available to Netflix subscribers (all 33 million of us). 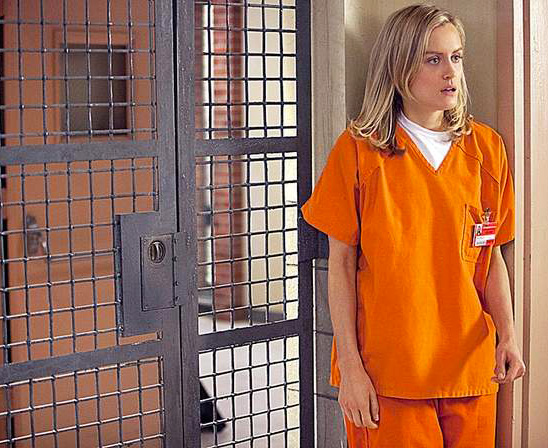 As the mainstream networks continue losing viewers due to bland programming, providers like Netflix are serving up some tasty alternatives. Orange is the New Black is the new dish on its menu and it's pretty spicy. It's also not for the easily offended or anyone who still considers Jay Leno "edgy" or even funny. Brief nudity. Language. Adult situations. You have been warned.

Orange is the story of Piper Chapman (Taylor Schilling), a woman in her thirties who's sentenced to 15 months in prison after being convicted of a decade-old crime of transporting money for her drug dealing girlfriend (Laura Prepon, That 70's Show). It's based on a true story written by ex-con Piper Kerman and directed by Weeds' Jenji Kohan.

It's gritty and funny and (since I've never spent time in a women's prison I can only assume this next part) all together REAL.

Schilling's portrayal of upper-middle-class-white-girl-sent-to-prison Piper is almost too good. You feel her pain, alienation and fear of the general prison population. The only thing missing from this soundtrack is Leon Russell's Stranger in a Strange Land. That song is the perfect illustration of Piper's plight - because, that's EXACTLY what she is.

If you're looking for a series to spice up your TV viewing, then check out Orange is the New Black. The entire 2013 season is now available on Netflix streaming.