Netflix has had a string of hits with its original productions. I love Orange is the New Black and Charlotte and I can't wait to binge-watch the next season of House of Cards. But when Netflix announced its latest series would be animated, I balked.

I shouldn't have been concerned. This ain't the animation you grew up with. This is animation for grownups. 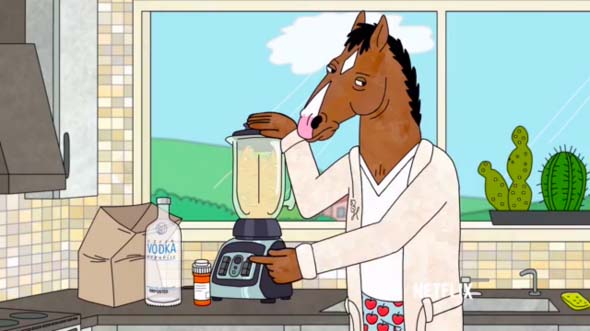 Meet BoJack Horseman the beloved sitcom horse of the 1990's TV series Horsin' Around. It's 20 years after BoJack's show took its final bow. Now he's a washed up actor who's older, fatter, complains about everything and lives off his residuals.

Think Mr. Ed. That is, Mr. Ed imagined as a pill-popping, alcohol-abusing narcissist.

The premise is simple. BoJack (Will Arnett) is trying to get his career back on track by writing his memoirs. He's having a difficult time putting hoof to paper, so his agent Princess Carolyn (Amy Sedaris) hires ghost writer Diane Nguyen (Alison Brie) to help him.

It's satire at its best. The sendups and inside jokes poke holes in every Hollywood cliché. And the dialog sparkles with a razor-sharp sense of humor that's laugh-out-loud funny. A stellar cast of characters including Breaking Bad's Aaron Paul, Patton Oswalt (King of Queens) and Stanley Tucci (The Hunger Games) lend their voices to the adult-themed comedy.

If your video stable could use a few laughs, then saddle up BoJack Horseman and go for a ride. All 12 episodes of Season One are up on Netflix right now.