Eye in the Sky

I love war movies. As a kid I grew up watching John Wayne, Jimmy Stewart and Humphrey Bogart fight in the Pacific, Germany and Japan. The movies were black and white and so were the ethics. That's not true today.

Eye in the Sky releases March 11 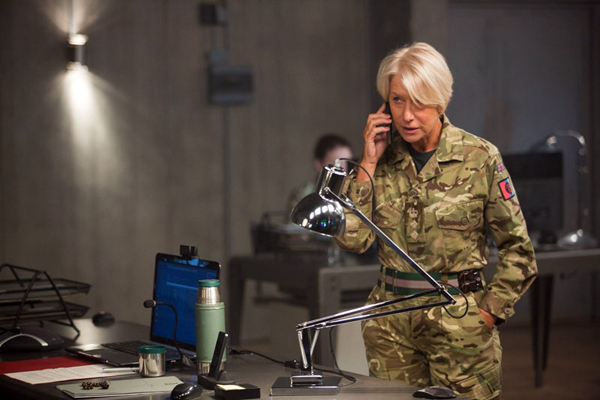 If the wars in Iraq and Afghanistan have taught us anything, it's that they're nothing like the battles fought by our fathers and grandfathers. The issues in yesterday's battlefield were black and white. Today they're varying shades of gray.

Perhaps that's why I like the latest in a string of complicated war dramas, Eye in the Sky, so much. It's ripped-from-the-headlines topic and behind-the-scenes setting puts you in the middle of the moral dilemma that is today's battlefield.

Meet Colonel Katherine Powell (Helen Mirren,) a UK-based military officer in command of a top secret drone operation to capture terrorists in Kenya. Through remote surveillance and on-the-ground intel, Powell discovers the targets are planning a suicide bombing and the mission escalates from "capture" to "kill."

But as American pilot Steve Watts (Breaking Bad's Aaron Paul) is about to engage, a nine-year old girl enters the kill zone. This, of course, triggers an international dispute reaching the highest levels of US and British government over the moral, political, and personal implications of modern warfare.

It's a taught drama with plenty of you-are-there moments. Paul and Mirren play well against each other and the script (Guy Hibbert, Prime Suspect) is terse and tension-filled up until the end.

If you're looking for a movie that makes you think and leaves you guessing, then check out Eye in the Sky. It'll have you seeing things you never saw before.

Eye in the Sky

I Give It a Year