John F. Kennedy has been on my mind lately. 2011 marks the 50th anniversary of his inauguration as President of the United States. And I recently got a behind-the-scenes look at his life courtesy of the REELZ Channel's controversial The Kennedys miniseries.

Bob and I DVR'd the eight-part, bit-of-history on our 35th president and his close-knit clan. Watching Greg Kinnear as JFK and Katie Holmes as Jackie, it seemed I'd stepped back in time (though you should know I was only three when they entered the White House so it wasn't exactly déjà vu).

Talk about family politics. Abuse of power. More than rumored indiscretions. And wives that seemed strangely forgiving when their men strayed (what's up with that?). This was first-class entertainment. 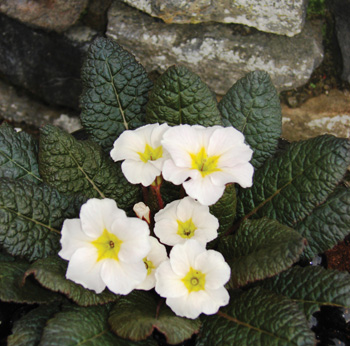 In the midst of our journey-back-in-time, I learned two new Kennedy Irish Primroses had debuted in the U.S. this year. One of them, the Drumcliff, was given to first lady Michelle Obama by Ireland Prime Minister Enda Kenny and his wife, Mrs. Fionnuala Kenny, during a St. Patrick's Day visit to the White House.

"Wouldn't that be a fun addition to our garden," I thought.

Thanks to the folks at Heronswood Nursery (a great source for new and unusual plants), it wasn't long before the distinctive perennial arrived at my door. Opening the box, I was impressed that it already had several tiny, clear white blooms, showing bright yellow centers and just a tinge of lavender on the petals. The flowers offered a stunning contrast above the plant's rosettes of glossy, dark bronze-purple foliage.

Per the instructions, I set my Drumcliff outside for two days before planting so it could acclimate to our area. Meanwhile, the more I learned about the unique, new primroses, the more I liked:

·         The white-flowered Drumcliff and its red-bloomed counterpart, the Innisfree, are named in honor of the well-known Irish poet W. B. Yeats. 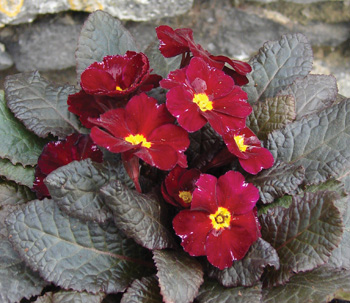 They marry the primrose's old-fashioned beauty with leaves much darker than those of other varieties.

·         They're part of a collection bred by Joe Kennedy, one of Ireland's leading primrose breeders (not to be confused with JFK's power-hungry dad), over 35 years from old Irish strains.

·         He propagated them in County Wexford Ireland near the original home of the Irish-American Kennedy family.

·         Irish legend says primroses keep evil fairies and witches away. (Who couldn't use some help with that?)

Since they thrive in shade or part-shade and don't like heat, I selected a cool spot near our backyard fountain for planting. There I can keep my little treasure from high temperatures, drying and direct sun. I mulched around it for additional protection and weed control. You can also grow primroses in mixed containers for spring blooms. Then transplant them to a protected area outdoors before summer comes, so the plants can get established.

Ferns make ideal companions for primroses. I'll be pairing mine with an Ostrich Fern. Country Living April says this impressive plant is a favorite of garden designers like Vermont's Julie Moir Messervy because it naturalizes easily and can be grown in shade or sun.

I'm also planning to move my primrose later because they can become tired if left in same location too long. Pat FitzGerald, of Ireland's FitzGerald Nurseries, recommends dividing plant clumps every few years and digging in good organic matter to enrich the soil. He says primroses transplant quite easily from division even late in the spring but it's best to do this work in the fall.

In the meantime, I can't help but smile when I walk the path by my striking, petite Drumcliff primrose. We may be in Texas but it gives us a little-taste-of-Ireland with what I like to think of as presidential appeal.

Down to Earth: Needs well-drained, humus-rich soil with a ph of 6 to 7

Flower Power: This charming spring bloomer shows its stuff for about six weeks, April to early May, in our area.
Brown-Thumb Approved: Sure, so long as you follow the primrose growing tips above.