I used to think I knew a lot about music until the birth of our son, Cole. This kid came out of the womb with an encyclopedic knowledge of every musical genre from Robert Johnson to Daft Punk. I gotta confess it's 50% intimidating / 50% enlightening. But, it's also damn cool when he turns me on to a new performer like Father John Misty. 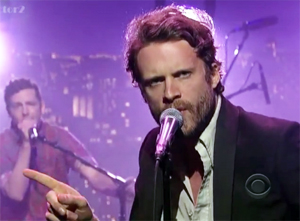 Father John Misty (real name Joshua Tillman) is an American folk singer, guitarist, songwriter who's been putting out a steady stream of recordings since 2004.

He's a former indie rock phenom who was a member of Saxon Shore and Fleet Foxes and toured with Pacific Northwest artists Damien Jurado, Jesse Sykes and David Bazan.

The 32-year-old has a terrific Gram Parsons/Neil Young/Dwight Yoakum/Chris Isaak-esque voice that's powerful, melodic and often haunting. He's a wonderful songwriter with an ear for catchy lyrics that'll make you think - and sometimes even make you think you can dance (never a good idea for me).

Father John's latest album, Fear Fun, was released last May and it's available on iTunes, Amazon and his website. If you don't have a son/daughter who's hip to this stuff, then take it from me, by way of my savvy son - and download some Father John Misty today.

I'll tell Cole you said "thanks."

Nancy from Now On - featured on Fear Fun