Charlotte and I are BIG Netflix fans - streaming and instant. But, sometimes we'll put movies into our DVD queue and forget about them until they show up at our home like an unwelcome guest. This happened to us recently when Mud appeared in our Colleywood mailbox. 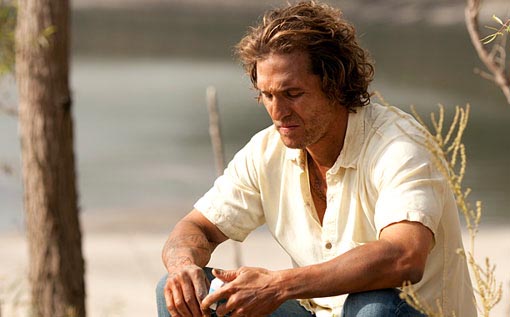 Mud is a southern film noir film starring Matthew McConaughey, Reese Witherspoon (Do You Know Who I AM?), Sam Shepard and Ray McKinnon (Deadwood). Jeff Nichols wrote and directed this gem about two boys, Ellis and his friend Neckbone, who find a man named Mud (McConaughey) hiding out on an island in the Mississippi.

The story is edge-of-your-seat tense and downright poetic in a southern sort of way. It's a tale of love gone wrong, vengeance gone right and kids dealing with adult problems. This southern charmer is Stand By Me meets Out of the Past and it's terrific.

If you're in the mood for a mystery-thriller with a southern drawl, then immerse yourself in Mud. You'll be glad you tracked it into your house.